Rachel Wilhelm‘s first love is serving the church on Sunday mornings. Her second love? Songwriting and filling in gaps she sees in the church’s musical storehouse. We have been truly blessed by her second love, and have loved sharing her music with others. She describes her new album Requiem as “folk-style songs ordered after a traditional requiem to grieve all the loss from 2020” (available now on Spotify). The songs are exceptional and the production is truly stunning, but there is more. Most, if not all, of us have suffered loss of some kind in the past year due to the global pandemic. Rachel invites us to take a journey with her in grief and healing. We encourage you to accept her invitation.

UTR: What led you to pursue music and ministry?

Rachel: I grew up in the church, so ministry work was never a foreign idea to me. I also sang on the music team for my youth group band, so music and church always went together as is the case for so many musician friends I know. I’ve always been deeply attracted to Scripture, so I feel that I am pursuing my highest calling when I am writing from it or writing in a fashion that points to the worship of Jesus. I’m finding along the way that God has led me to pursue ministry and music as well. I’m not a touring musician and don’t want to be. That’s not my calling. I’m called to lead God’s people in musical worship at a local church and write songs for the church. And as I have worked in ministry, I have noticed that everyone is hurting. And a lack of lament and facing issues while in church and with community is the source of a lot of pain. Most people don’t realize it but deny it, resist it heavily, and choose to believe that “keeping positive” will cure it. Keeping positive has never cured emotional pain and never will. We have to grieve our sorrows in a mature way before God, and with our community, to move forward in healing. This is what led me to write the Requiem record.

UTR: Yes, speaking of that, we have found Requiem to be both timely and meaningful. What was the impetus behind creating the record?
Rachel: I had no intention of putting out another full-length record after my first, Songs of Lament, actually! Kate Bluett, the co-writer for six songs on the album, and I had a phone conversation about a different project, and she asked me if I had ever thought about writing a Requiem. This was March 2020 right as we started quarantine. Kate was struggling herself with everything going on, and all the death. She told me she was listening to requiems at night to soothe herself. I told her I’d write one if she wrote the words. We immediately started working on it, sending each other links to requiem song line-ups and studying which ones to tackle first. Kate is a Catholic, so she is very familiar with the structure, and I was only familiar with Rutter’s Requiem. We pulled our friend Amber Salladin, who is now working on choral arrangements for the Requiem into the planning process, and she helped us flesh out what could work structurally. Kate is a very prolific lyricist, so she sent me lyrics every other day or so. I opened up the Book of Common Prayer and looked at its burial service (Anglicans don’t have a funeral service, to my sadness!) and the Job passage of “Man that is born of a woman has but a short time to live” jumped out at me. I actually wrote that title track right then, but tossed it aside thinking it was probably not very good. Only near the end of the process did I pull it out and finish it while laying down the scratch tracks in my closet. Yes! My closet! You do what you can when you record remotely!

UTR: Who are some of the contributors on this album?

Rachel: I had worked with Jered McKenna on a separate project, and he produced one of my songs and I was really impressed with how daring he was. I didn’t quite want a folksy sound—but also wanted some classical and ambient elements for Requiem. I couldn’t really think of anyone else that I knew who could read my mind and pull it off—remotely. And not many producers are willing to record remotely, even during a pandemic. And because I’ve worked with cellist Keiko Ying before on other projects, I knew I could trust her to engineer her own beautiful tracks well. Both Jered and Keiko did an incredible job. Of course, I already mentioned Kate who is one of the most prolific poets of our time. I met all of these friends in a Facebook group called Liturgy Fellowship, and honestly, this project would not be around had it not been for LF and the connections I’ve made there. 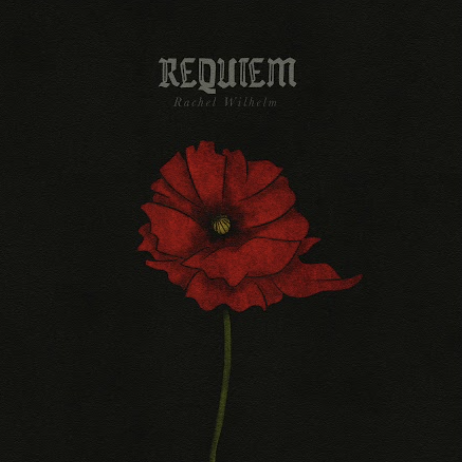 UTR: How were you able to create such a well-crafted production during the restrictions of the pandemic?

Rachel: That’s a good question. I would say it’s all Jered. He is a hidden gem—he has a studio in his home in South Carolina, and he is, like I said, daring enough to make something happen that sounds kind of crazy at first. In fact, when we started, I just asked him to help me produce only three of the songs. Then we just kept going. I would send him scratch tracks of guitar and voice and he would send me ideas, sometimes a completely crafted idea within a handful of hours. He would say, “I’m in the studio right now, so I’m going to keep bugging you while I’m here just like if you were with me.” We only emailed and shared Dropbox files back and forth. We never spoke on the phone except during the very last song we recorded, “Lord Have Mercy (Kyrie)”. That was a very involved song, with all my friends singing as the “Kyrie Choir”, so it took actually having to pick up the phone!  I recorded and engineered all my own vocal tracks. Except for the Lord Have Mercy song, all the vocals are me, except when you hear a male vocal, which is Jered. I would sing out all my ideas and he sent me the results. Jered plays a lot of instruments as well, so he added all the instrumentation. I only played banjo on “Martha’s Song”! And speaking of “Martha’s Song”, it took me a week to record it because Kate’s words paired with the achingly sad melody had me weeping every time I tried. I kept thinking of those I have lost, and those who have lost loved ones. Such a beautiful section of Scripture, and in the song, from the perspective of Martha, before Jesus raises Lazarus.

UTR: What would you like the listener to experience when listening to Requiem?

Rachel: I want Requiem to be a resource for people who are mourning. There’s not really much out there, except for traditional requiems, that speaks directly to a mourner in a liturgical way. When my sister died in 2010, I could have used this. It was written to bring closure during a pandemic where those who could not hold a normal funeral service could have that resource handy in the privacy of their own homes. But I can see it helping outside of COVID and even outside of death. We all have lost something, and we continue to grieve in life. It’s a very intentional record, and you have to be prepared and ready to mourn. Many who are mourning who I have sent this record to can’t handle the thought of listening to it yet. It’s a patient album —and will be there when we need it.

Rachel Wilhelm has a multifaceted ministry. Besides her songwriting and recording, she is the United States Team Leader at United Adoration, and the Minister of Music + Worship Arts at Apostles Anglican Church in Knoxville, TN where she lives with her family. Requiem, and Rachel’s other releases, are available on all music platforms and at https://rachelwilhelm1.bandcamp.com/